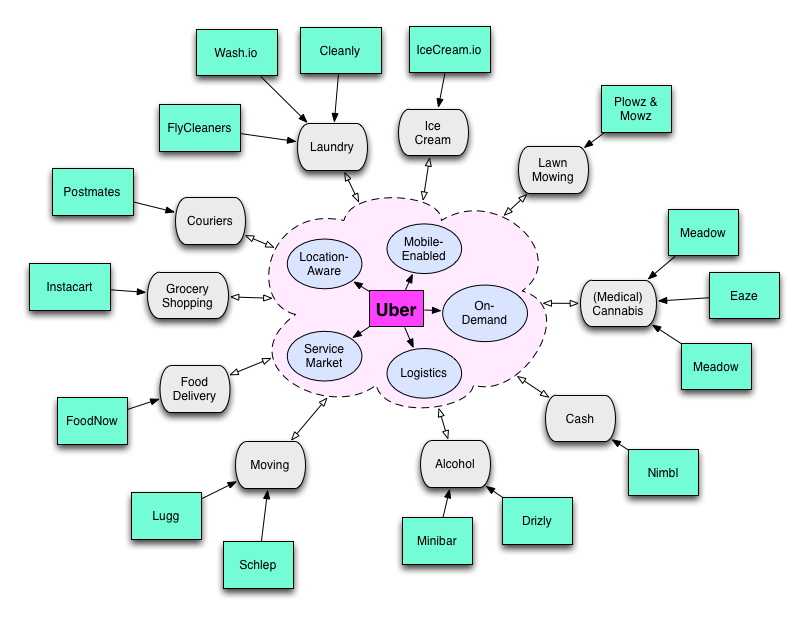 The question we want to answer here is, “functionally speaking, what do we mean when we say that a company’s product or service is ‘Uber for X’?” END_OF_DOCUMENT_TOKEN_TO_BE_REPLACED

Abstract/TLDR: The biggest opportunity for companies like Uber and Lyft is to expand their transportation services to third parties and diversify the type of objects they convey from one place to another. In doing so, the metaphor we use to describe these companies can shift from platforms to protocols. In short, these companies are building what I’m calling the IRL Transport Protocol, a system for routing packets (in the form of cars and bikes) and their contents from point to point.

This is a draft of a paper I recently submitted.

END_OF_DOCUMENT_TOKEN_TO_BE_REPLACED

Note: This piece was first submitted as a paper for an academic project. I plan to expand parts of it into a much longer article. It was originally published online on my Medium blog.

There is little doubt that the advent of mobile communication platforms has radically affected how protests form and manage themselves. The speed and scale at which protesters can communicate their message, galvanize a base of support and report government infringement of their free speech rights is unprecedented. Governments, citizens and traditional media outlets treat “social media” as a monolithic entity, despite the fact that different communication and publishing platforms have diverging patterns of use, different sharing mechanics, and different levels of privacy protection. In this paper, we will examine the role a particular “genre” of communication platform plays in protecting citizens’ free speech rights in protest situations. By examining two cases from the recent past — the Hong Kong and Ferguson, Missouri protests of 2014 — we seek to demonstrate that decentralized and/or end-to-end encrypted mobile messaging platforms provide a first line of defense against government crackdown on free speech. To do so we will first explain the different facets of the “social media” landscape in two dimensions: the default scope of content sharing on a given network, and the degree of privacy protection afforded to users. Then we will describe the many similarities between the Hong Kong and Ferguson cases, and explain the role of decentralized and end-to-end encrypted messaging applications at the point where the cases diverged. END_OF_DOCUMENT_TOKEN_TO_BE_REPLACED

Note: This is a cross-post from my Medium blog, originally published in January 2015. I included it here on my website to kick off the new blog.

I’d originally intended to share this list of bullet points with a friend. Some are general, some are personal. A few are quite revealing, but I believe that personal faults and foibles are rendered less significant if they’re openly shared.

Nothing to hide, nothing to fear, right?

I’m sharing this list mostly because I think some of the things I learned are potentially valuable and applicable to other people* (See note at end of post.)

So, that’s about it. I hope you found parts of this post valuable. If so, I’d love to hear about it in the comments. If not, but you scrolled down to the bottom to see the little note at the end, I hope that doesn’t leave you dissapointed either.