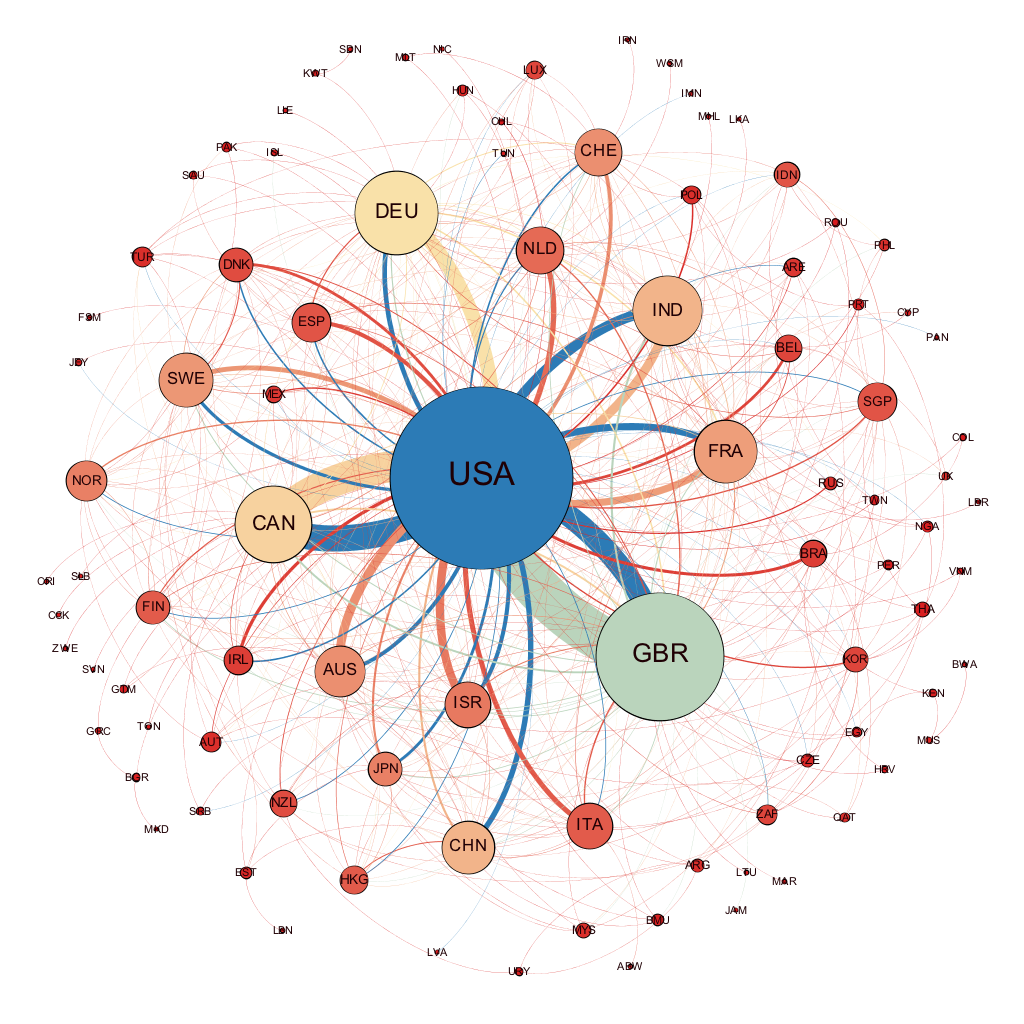 Earlier this week I published a piece for Mattermark’s blog that maps and visualizes the network of international mergers and acquisitions of startups and a few other private companies. To accomplished this, I used data from Mattermark recording 2,250 cross-border M&A deals made between January 1, 2015 and the end of August, 2015.

The visualization I made for that piece is one of the coolest I’ve made during my time freelancing for Mattermark. (See featured image above.) An explanation of how to interpret this network visualization can be found in the piece on Mattermark’s blog. But that’s not what this post is for.

One of my editors asked me to share some information about how I created the visualization and more about social network theory and analysis in general. Rather than letting my list of resources lie forgotten in a direct messages channel on Slack, I decided to expand and share it here for other people to benefit from.

One thing to note before continuing, most of the resources I included here are pretty light on the actual math behind networks, and for good reason. Even in the network theory-related coursework I did in college, we didn’t have to do much math ourselves because the various software packages we used handled most of the quantitative heavy lifting.

Also, I consider this all high-level, introductory material. There are lots of ways in which network theory and analysis can be used in social sciences, finance, biology and elsewhere. Lists of more in-depth resources might be the subject of later posts.

Christakis, Nicholas A, and James H Fowler. Connected: The Surprising Power of Our Social Networks and How They Shape Our Lives : How Your Friends’ Friends’ Friends Affect Everything You Feel, Think, and Do. New York: Back Bay Books, 2011.

Complexity Academy is a Youtube channel with educational videos about systems and complexity thinking. Their short course on network theory is surprisingly good.

The Human Behavior Project is a collaborative academic project that aims to integrate and connect insights from the behavioral sciences through natural language processing algorithms. The HBP has a wiki page for social network theory with a long list of foundational academic papers on the subject. It might be a good jumping off point for those interested in the academic side of SNT.

Tools and Data for Processing and Visualizing Networks

There are many software packages out there, but my favorite is Gephi.

Stanford has a large collection of open datasets you can use for network visualization.

If you have any further suggestions for good introductory level materials about network theory, I’d be glad to integrate them into this list. You can contact me via the form on the top of my web page.

Special thanks goes out to the people who responded to this Quora question regarding online courses about social networks and social network analysis.